Hazro has the largest population (6553) in Tehsil Attock. The population is half Pathan and half Hindu. It is followed by Attock Town (2890) and Campbellpur (1467). It is a pretty little town situated in the middle of the fertile Chhachh valley. It is lying between the Indus and sandy Campbellpur plain. Its white mosques are visible from a great distance. It was the site of the great battle in 1008. Sultan Mahmud Ghaznavi defeated the united forces of the Rajas of Hindustan. After the battle some Pathan followers of Mahmud settled here. It was frequently looted prior to British rule by Pathans marauders from beyond the Indus.  It never attained any position beyond that of a large   village earlier but has now greatly increased in size and prosperity. Grains of all kinds are collected from the rich fertile villages around. An excellent quality of snuff’ is manufactured in large quantities. All these goods are exported in exchange for European piece-goods, indigo, etc. The town is surrounded by a wall, and the bazars are neat and clean. Of public buildings, there are police station, school, dispensary, and a municipal Committee office, which is also used as a court. The Municipal Committee consists of three ex-officio members and 11 nominated by the Deputy Commissioner. Its income is entirely derived from the octroi tax. It is to be regretted that the Panjab Northern State Railway does not pass close to the town. The road to the nearest station is expensive to maintain.

Attock town. The importance of Attack is due to the commanding position of the fort, built on a road overlooking the bridge of boats over the Indus. It is forming one of the chief defences of our line of communication with the Frontier. The bazar was formerly located within the fort. It is now situated on the rocks outside. Above Attock, the Indus is a mile in breadth. Near fort it is joined by the Kabul River.  Three miles below the fort is the magnificent iron bridge which conveys the Panjab Northern State Railway and GT road.

At Attock the Indus was passed by Alexander by a bridge of boats built by General Hephaestion. The fort was built by Akbar in 1581 on his return from an expedition against his brother Mirza Hakim, Governor of Kabul. He gave it the name of Attock Banaras in contradistinction to that of Kattak Banaras, the chief fort at the other end of his empire. General Cunningham believes the name to be of antiquity. He identifies its root with that of Taxila, and both with the name of the Taka tribe, who in ancient time held the country between the Margalla pass and the Indus.

Akbar also established the ferry, and imported a colony of boatmen from Hindustan. The descendants of boatmen still live at Mallahi Tola. They enjoy the revenue of (Mallah) a village in Chhachh, which was granted by Akbar for their support. In 1812 Ranjit Singh seized the fort from the Wazir of Kabul. It remained in possession of the Sikhs until the first Anglo Sikh war. In 1848 it was gallantly defended by Lieutenant Herbert, but ultimately captured by the Sikh rebels. Since the close of that rebellion, it has been occupied by the British troops. The recent garrison consists of detachments from a battery at Campbellpur and from the British Infantry regiment at Nowshera.

The bridge was opened for traffic in June 1883, and is guarded by a detachment from the Native Infantry regiments at Rawalpindi. Till the railway bridge was completed, a bridge of boats in the cold season and a ferry in the summer was maintained over the Indus at Attock. The crossing is dangerous on account of a whirlpool formed by the junction of the Kabul River with the Indus, which takes place just almost opposite, Attock. Below the junction are two rocks, known by the names of Kamlalia and Jalalia, which jutting into the river, render the passage still more dangerous. Boats are not unfrequently dashed against them. The names are derived from Kamal-ud-din and Jalal-ud -din, sons of the founder of the Roshnai sect. They were flung from these rocks for adherence to their father’s heresy during the reign of Akbar.

The principal merchants in the town are the Parachas. They are enterprising Muslim race who penetrate into Central Asia, and there exchange Indian goods for those brought by the Russians and others from China, Tibet, and Tartary. The principal antiquities are the fort, and a handsome tomb of Kanjiri (The Dancer). The public buildings are the church, the court of the Assistant Commissioner, police station, staging bungalow, two serais, a school and dispensary. A tehsil building is being erected. The Municipal Committee consists of three ex-officio members and seven nominated by the Deputy Commissioner. Its income is chiefly derived from octroi. In 1881 the population was Attock town 2890, Mallahi Tola 1761 and Cantt (fort)190.

Campbellpur is garrisoned by an Elephant Battery and a Field Battery. The inhabitant’s number 1,467. The river Haro, which skirts the cantonment, affords fair fishing. Urial, ravine deer, sandgrouse, and Chakor are found on the neighbouring hills. There are no public buildings and no staging bungalow. Haji Shah railway station is three miles distant. The adjacent village (Kamilpur) is a small place inhabited by Sayyads.

Report on the Rawalpindi Settlement 1865-Part I

Sat Dec 17 , 2022
Summary of a Historical Report on the Settlement of Rawalpindi. 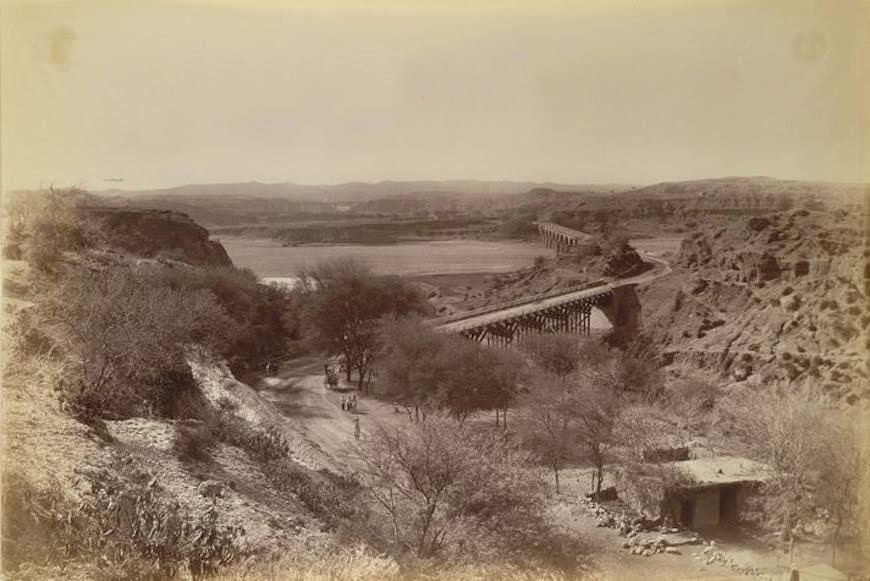